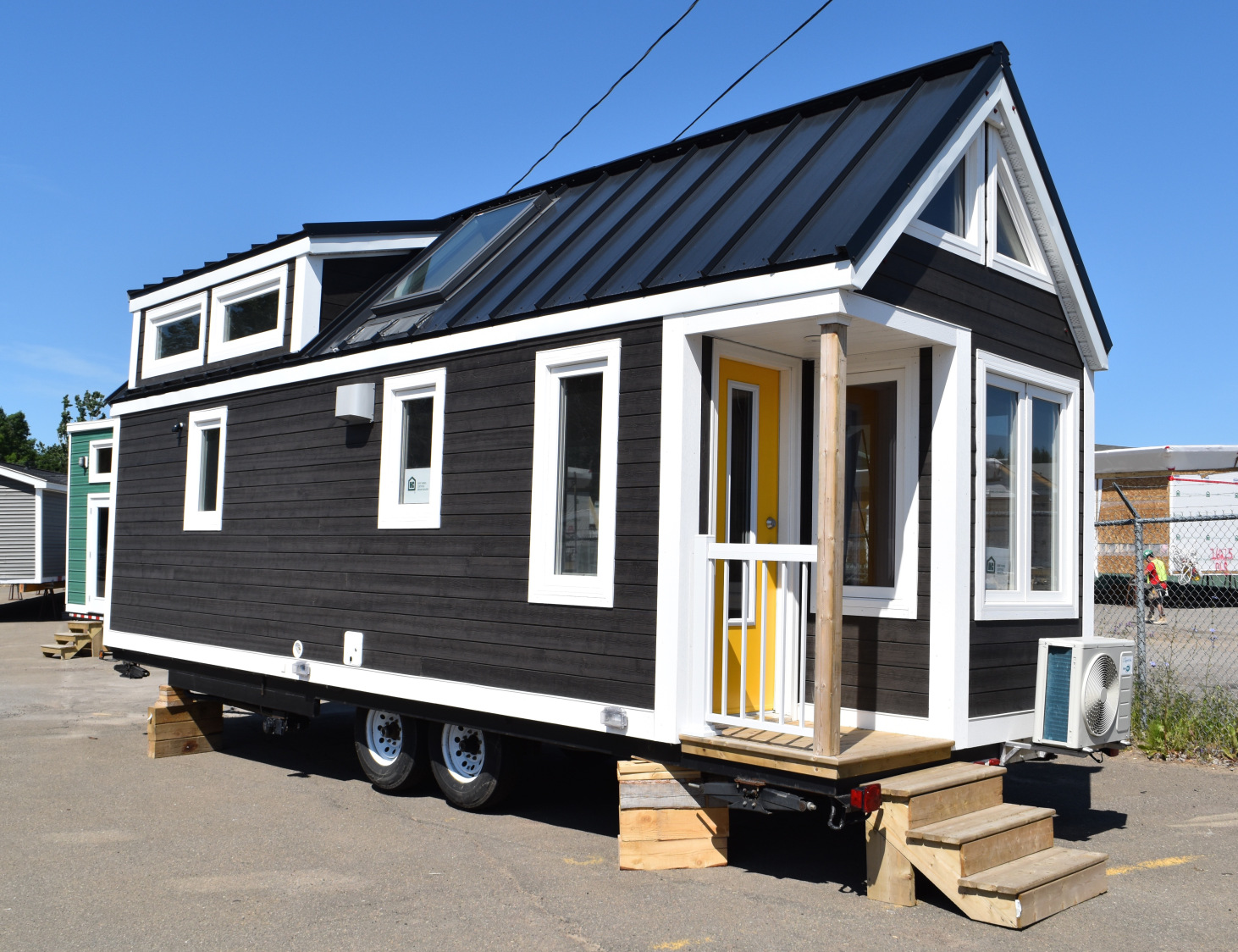 It happened – we actually stepped foot into a Tiny House today!! It was our first experience in a Tiny House, and we are so excited to tell you all about it! Big thank you to Laura Maillet from Kent Homes in Bouctouche, NB for giving us this tour.

When I first stepped foot into one of the Tiny Houses we were visiting at Kent Homes, I knew it was meant to be. A feeling I can’t quite describe washed over me. It was a mixture of joy and belonging, and knowing that I was right where I was meant to be in life. This is my future. I am a Tiny Houser.

I first spoke with Laura Maillet, designer and employee at Kent Homes in Bouctouche, about a week ago. It did not take long for us to set up a meeting time, as I had explained to her that I was interested in getting as much information as possible about Tiny Houses and their place here in Eastern Canada, more specifically in New Brunswick. 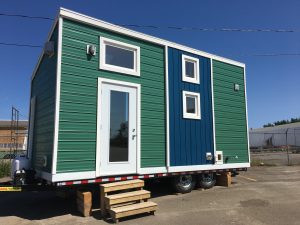 Laura was such a pleasure to talk with. We met up with her this morning at 10AM and we hardly stopped talking during the whole 2 hours we spent there.

As soon as we arrived, she greeted us and we went straight to visit the first of their two finished designs. The one we were about to enter was called The Haven, and it’s name was right on par – safe, comfortable, cozy, home. The inside was all wood, giving it a very traditional cottage feel, which is a big appeal for customers in Maritimes and surrounding areas.

The Haven had one large loft for a queen or king sized bed, and a smaller loft which can either be used for storage or as a small second sleeping area. Below that small loft is a custom built couch, which could also double as a spare bed if a customer wanted. Walking a little further into the house is a seating area across from a large screen TV mounted on the wall, and then the kitchen area – personal favourite! On one side, the fridge and the (steep) steps to the main loft. On the other side, some counter space, a four burner propane stove-top/oven, a sink, and lots of storage space! Gotta love that storage space. The house is also equipped with a washer-dryer combo (apparently not very efficient, as I’ve read in many reviews – at least not in Canada) and a nice washroom with a flushable toilet (could also be a compostable toilet), a small sink, and a nice shower. 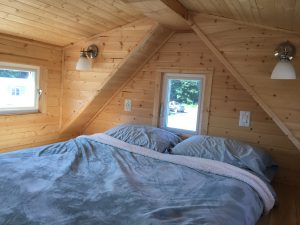 One thing that stood out to me immediately was the amount of natural light coming into this Tiny House. Laura explained that the average 2-3 bedroom house will have 7 to 9 windows, whereas this particular house has 18, including the skylights. Every space in the home feels light and open, despite the size of the entire building being under 200 square feet. I was happily surprised, I did not feel closed in at all. It was even cozier than I had imagined, if you can believe it! 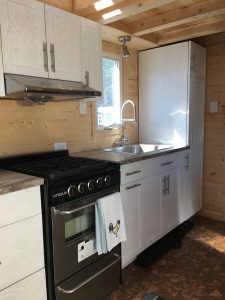 The more time I spent inside the small little house, the more it became clear that I really was taking a step in the right direction, that this was exactly where I was meant to be. And thinking of that made me wonder about Laura’s journey, and what it is that brought her to thinking about Tiny Houses, let alone designing them.

Laura’s daughter was apparently an environmentalist, very conscious of her ecological footprint, and began sharing information and pictures she would find online about Tiny Houses when they first came out in the early 1990s. Laura was intrigued. She had always been interested in small space designs and fell in love with Tumbleweed’s first series, which consisted of cottages. Since that time, she had always photos or images pinned up around her desk, and one day, a new VP walked into her office and noticed them. Given their growing popularity in the past few years, he suggested, “Why don’t we build one?” And thus the project was born.

Laura and two other employees from Kent Homes actually got the chance to attend a Tumbleweed Building Seminar in Boston – something I’ve long been debating! She let us know how informative the weekend was, and that they had even approached them to partnering up to do this project, but unfortunately, they weren’t ready to commit so Kent Homes decided to do the project independently.

Given their connection with Tumbleweed, they were their first choice for purchasing a trailer to start building their first demo Tiny House – The Haven. Unfortunately, Kent Homes had the displeasure of learning that trailers certified in the Unites States do not meet the Canadian standards. Therefore, their display model will probably remain a demo and never be sold, as it is not road-worthy in Canada. 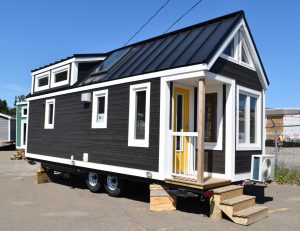 The bright side: they found a hidden gem nearby. A company named Linkletter’s Welding Ltd (LWL), located in Central Bedeque, PEI, was willing to not only build them custom-made trailers (lowered floor between the wheel-wells), but also to certify the trailer and house as a whole. You read that correctly – they will certify both the trailer, and the plans for the tiny house. Because of this, Kent Homes is limited to only selling the plans that have been approved and certified, so there is not always room for customization. But if you check out their options online, you can see they are pretty much all great choices.

Once they had trailers on hand, they were ready to get down to business – starting the actual build of their first Tiny House.

Laura informed us that approximately 425 hours of work were put into building The Haven – keeping in mind that numerous departments had to play a part in the design and construction of the building, and this was in fact a demo home. She said after ironing out all the kinks, they were able to build a second model (their first sale!) in about 4-5 weeks, working on it full time. But she emphasized about taking the time that is needed to get everything done right, to figure out the best approach for individual project – and sometimes that means standing around for hours trying to figure stuff out.

One very interesting idea that Laura mentioned they had tried out was doing a taping exercise. Basically, they taped off the realistic proportions of the house walls, appliances, furniture, etc., to see how it felt to walk around in it, to make sure it’s comfortable to walk around everywhere and not feel confined in a small space.

“A house doesn’t have to be big, it has to be functional.”