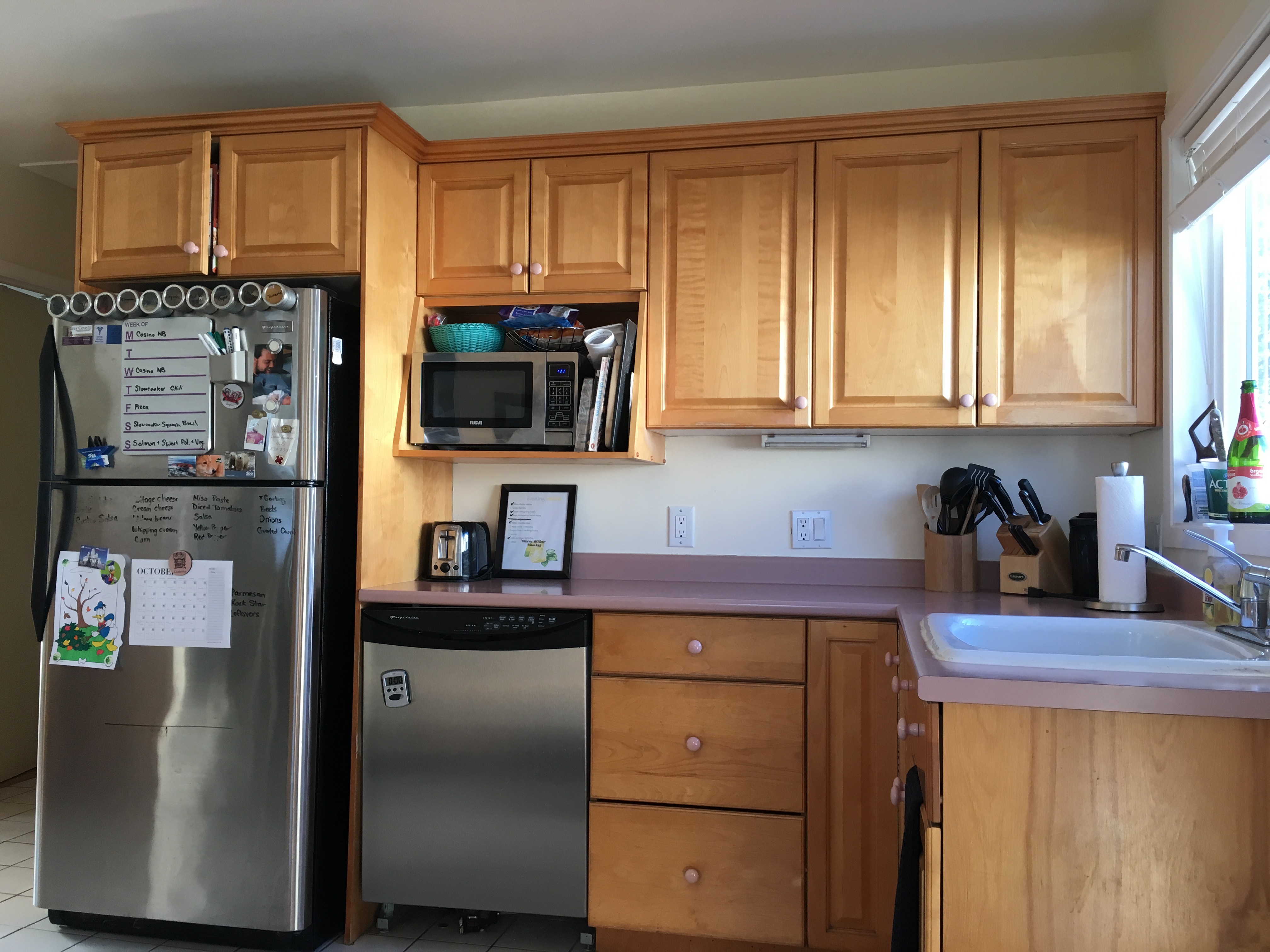 If you haven’t been following our Downsizing Diaries series, you’re definitely going to want to head over to our first post to read all about it. So far, we’ve covered The Garage (even though it’s a total mess again), The Closets (actually in good condition, but we’ll hopefully be doing some improvements soon!), and The Living Room (a giant mess right now, due to us just getting home from holiday travelling). There is still lots of work to do – don’t be surprised if you see a “Part 2” of each room later on – but we finally managed to tackle one of the most cluttered rooms in the house, the kitchen.

The kitchen is probably one of my favourite rooms in the house, which is good because it’s probably the room I spend most of my time (when I’m conscious). I love cooking and baking, but most of all I like keeping everything in order. I like when everything has it’s place and isn’t too overcrowded. But when you rent a home, sometimes that can be hard to do. And that’s why downsizing is so important in any situation – the less you have, the less you have to worry about.

Every time I start reorganizing my kitchen, I start with the biggest task – cleaning out the cupboards. Some people prefer to do the fridge first, which I can understand because it will (hopefully) take a lot less time than going through all of your cupboards, but I need to get the worst over with right from the beginning.

We have quite a few cupboards, which I have named accordingly:

Of course, we also have our beloved drawers:

I feel a bit bad for my brother, who lives with us. Out of every storage space I just named, he uses only the Pots & Pans, the Cutlery, and has one Food Cupboard to himself. Maybe I should ask him to teach me a thing or two about downsizing!

Our food cupboards are our biggest ones so I opened those first and emptied the entire thing. Yes, you read that right – I emptied it! I can’t reorganize or downsize anything without starting fresh, so everything goes on counter tops to start and I wipe down every shelf with a disinfectant wipe or spray. After everything is out of your cupboard, you can take a good long look at all the crap that’s been hiding in there – including those old marshmallows you don’t remember buying.

For a long time, I kept two baskets in my food cupboard, half because everything got too cluttered without them, but also because they were the only baskets I had at the time. They weren’t that efficient, because they were quite big and tall so they blocked anything that would be stored behind them. So I removed everything from those baskets and started looking through the house to see if I could swap any of my other baskets. (I have baskets for everything. They are are my absolute favourite thing to shop for!)

In the end, I decided to go with two baskets, both for snacks, and keep one of the bigger baskets to keep pantry items that we don’t use daily, such as crackers, nacho chips, and mixes.

I was able to throw out a lot of out-dated junk during this cupboard purge, and I finally managed to get all my staple foods into glass containers, which I have been trying to do for about a year now!

I also got rid of one bowl, although we are still holding on to 3 others I would gladly part with were it not for Max’s insistence. I love glass bowls and all, but the two that we have are horrible sized (too small and wayyy too big), so we hardly ever use them except for pasta salad or potato salad when we have family over in the summertime. As for the appliances, we are pretty much down to the basics. We keep debating whether or not we want to keep the waffle maker, but I think it’s going to be a keeper because I regretted giving away my first waffle maker after my first year university.

Our second food cupboard has slide out drawers, which I both love and hate. I love the fact that they slide out so I can see everything all the way at the end of the storage space, however they are so small you can’t fit anything tall in there – cans and small packages only. I did manage to cram the bag of cat food on the bottom sliding drawer, and Kovu is well aware that that is where the food lies.

I don’t usually downsize much in that cupboard, but I always check the dates to make sure everything is not expired, and ask Max if he can think of someone who might like pickled beets, because we still have about 20 jars!

There’s not much downsizing going on in the pots and pans area, although I do make sure to give it a thorough clean. The reason behind this lack of downsizing is due to the fact that none of these items actually belong to us. We do own pots and pans, but they are  currently being stored in the basement since my brother had a set first. The only things we own in that specific cupboard are a colander, a glass pie pan – thank you to an old friend who said we could have it after scrambling to find 12 pie plates for all the apples we picked last year! – and two pyrex baking dishes for casseroles and desserts. And we are definitely keeping all those items.

Speaking of things we are keeping, high up on that list is my incredible Kitchen Aid Mixer, which stands on the counter top and not in a cupboard. I use this baby almost daily for anything and everything. So many goodies have gone through that mixer, including all those pies I just mentioned! And to make such wonderful desserts, we need to keep lots of baking supplies and baking pans on hand. Ok, not lots, but at least a few.

After emptying out and cleaning the baking supplies cupboard, here is what we decided to keep in the pantry:

I had a few other items in there that I hadn’t even opened since purchasing in the past two years, so I offered them to some friends and managed to give them new homes so they would be properly cared for, in someone else’s stomach.

I skipped the next few cupboards because they only contain things we use on a daily basis. Although, I finally did put all our old water bottles into the donation bag yesterday, for which I am quite proud of myself!

I moved on to drawers and didn’t have much work to do there either, except for the towel drawer that I am constantly organizing, and the dreaded junk drawer. Ugh.

Despite my best efforts, I think the junk drawer will always remain as such, but I did get it organized and removed things that did not belong there. Hopefully after reminding all roommates of what does belong in there, we can keep it tidy for a bit longer than usual.

To make myself feel better, I took a photo of how nice and organized the other drawer is.

The only thing I didn’t really get to was the cupboard underneath the sink, but fortunately no one but me ever uses anything in there so it stays very nice and organized most of the time. I’ll have to get around to doing a decluttering of that space later on to make sure we aren’t holding on to too many cleaning supplies – such as almost empty bottles – or too many gross old rags.

We managed to get this all done before the holidays, but now it’s time to get right back to it. Hopefully we’ll be able to share our next post of Downsizing Diaries soon enough, because there’s always more work to do!

Have you started a decluttering session now that the new year has begun? If so, let us know in the comments below! And if not, maybe you could join us in our downsizing journey in an attempt to be more with less.

3 thoughts on “Downsizing Diaries: The Kitchen”