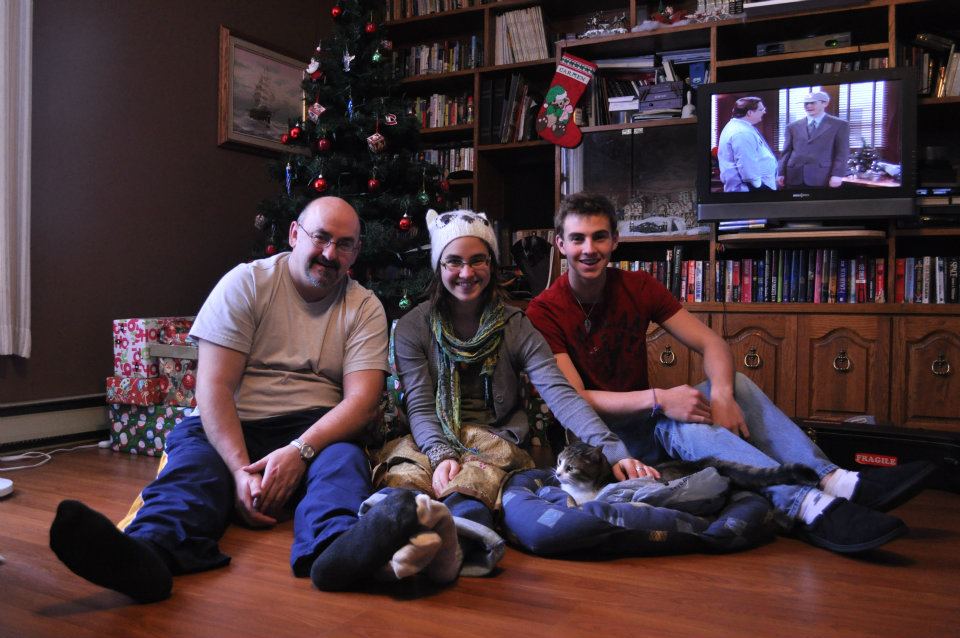 Everyone I know has at least one Christmas Tradition. When Max started mentioning all the things we absolutely had to do when we visit his family next week, I started to wonder what kind of things I usually do with my family. And all of a sudden I began to feel very envious of people and their beautiful Christmas Traditions, and even more so, all the memories associated with them.

It’s not to say I’ve never had any Christmas Traditions. Growing up, we would always – and I mean ALWAYS – have Christmas Eve supper at my grandma’s house down the street. When we arrived, everyone would make a HUGE scene, telling us that Santa had already been by and dropped off all our gifts! We would impatiently sit down to eat – OK, sometimes we didn’t eat – and then run straight into the living room to start the unwrapping. My uncle Henri would always be the one to give out the presents, sitting cross-legged right in front of their Christmas Tree, calling out everyone’s name, one by one.

Then, when it almost time to go home, my dad would head out and run home. I never seemed to remember this part as a kid, but I do remember hearing my grandma’s phone ringing and the look on her face when she told us Santa had been to visit our house too! Everyone would rush to get their boots and jackets and mitts on, and off we went!

And so this tradition continued on, even when all the kids were grown. If we were able to stay awake, we would all go to Midnight Mass that same night, and then play with our new toys until we couldn’t keep our eyes open any longer. I miss those days.

After my parents split up and my grandma passed away, everything changed. We still opened gifts on December 24th at my dad’s, but then we would drive up to Halifax on Christmas Day to be there on time for my mom’s Christmas activities on December 26th and 27th. And eventually we would make our way up to my step-mom’s house for the end of Christmas break. The word hectic doesn’t even begin to describe Christmas during my teens. And then I got a boyfriend, who also had divorced parents. And they lived in New Brunswick.

Fortunately, things have calmed down since them – very much so. For the past few Christmases, I was fortunate enough to host the festivities at my apartment in Moncton with part of my family. It almost felt like a new tradition, but not really. It’s been hard to establish new traditions because everything is so different every year. Just thinking about three years ago, I was in Rishikesh, India! And as much as I loved my trip, that’s definitely not going to become a part of Christmas traditions.

Finally here we are, in the present. Things feel a lot more stable. Without realizing it, I think I may have just started my very own Christmas Traditions. I mean, it’s nothing huge, but it made me tear up when Max mentioned it.

For the past two years, Max and I started something a little silly. You’ve probably heard of Elf on The Shelf, but have you ever heard of Giraffe and a Half? Well, let me tell you about it. The story behind it is that there are two little giraffes who live in our house, both named Gary. One is mischievous, always getting into trouble, and the other is usually on his best behaviour because he wants Santa to bring him lots of goodies. Every night, while we’re sleeping, these giraffes have their little adventures, and we post a photo on them on Facebook the next morning. We got lots of feedback our first year, so we decided to do it again this year.

Another little tradition we started last year was a SUPER cheesy Christmas Card! We weren’t expecting much from it – except the obvious comments from our moms, which was to take a nicer photo next time – but we actually got so many messages and comments from family and friends that we decided we needed to do it again! I won’t ruin the surprise for those who haven’t received it yet so here’s a shot of our 2016 card:

So I guess we do still have Christmas Traditions of our own. And here’s to many more.

Do you have any Christmas Traditions with your family or friends? We’d love to hear about them in the comments below!