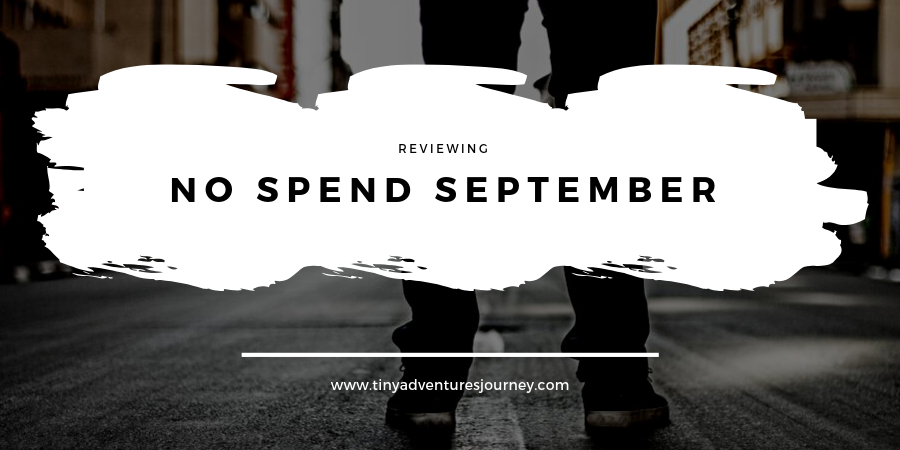 During the month of September, I chose to embark on a No Spending Challenge. Max and I have previous done a similar challenge, but this time was a bit different. It was different for a few reasons, but the most important of all is that it was actually easier than I thought it would be. Here’s is a more detailed account of our habits this past month, or in other words, my very own No Spend September Review.

I want to start off by saying that frugal living is not always easy. To be completely honest, it’s hard most of the time. But by creating specific goals, it becomes easier to make sacrifices in certain areas of life in order to see the fruits of your labours. All that to say: it’s totally worth it.

In our home, we prioritize saving money so that we can spend it on the things that matter most to us. By living frugally, we give ourselves the freedom to enjoy things like more time off from work to spend together, the opportunity to travel whenever we want, and of course our biggest goal, to build our own Tiny House.

Some of the things we do to practice frugal living is meal planning. But once in a while, we like to go a step further and try to see how much money we can really save throughout an entire month. Thus began the No Spending Month challenge.

One of my best friends messaged me around the end of August and told me about this Facebook group that her friend had started. Everyone in the group was participating in what they called No Spend September. I immediately thought to myself, I need to join this group and share all the things I’ve learned! But you know what’s interesting? I may have been able to teach them certain things, but they also taught me some important lessons.

I am not perfect, in any way, shape, or form. Even when I set goals for myself, I know that I cannot do everything flawlessly; but that’s part of the beauty of life, isn’t it? As with all things in life, I knew there were ways in which I would fail during No Spend September. But instead of being mad, or ashamed, or saddened by my shortcomings, I decided to look at it differently.

Initially, I had made a list of all the items that were exempt from No Spend September. This included things such as rent, groceries, fuel for vehicles, bill payments, anniversary gift, tickets to one event, etc. Although I actually didn’t end up spending money on some of the things on that list, I also purchased other things.

Here is a complete list of everything I purchased that was not included in the No Spend September exception list:

There were also some monthly expenses I forgot to include in the initial list of exemptions, such as my gym membership, my monthly donation to World Wildlife Federation, and an appointment to the dentist.

Despite the fact that everything didn’t go perfectly as planned, I know that I succeeded in many ways. My failures are only signs of progress. So to end this post on a positive note, I want to share how I succeeded during No Spent September.

I like to look back at previous month to really get a better sense of what I’ve been able to accomplish. My spending habits are ever-changing, so there’s no fixed amount I am spending every month. I allow myself to shop for things, to buy items every now and then, without too much restraint (keeping in mind that I’m a very frugal person). Therefor my credit card bill might be a bit higher say in July than in February.

To give you a general idea, one of my credit card’s statement balance ranges from $700-$1500, while my second credit card ranges from $400-$900. These amounts include all living expenses for 2 people, excluding rent and electricity.

During the month of September, here is a breakdown of every single thing I purchased and its associated cost:

My credit card statements were significantly lower than any other month. The first of two had a statement balance of $511.37, whereas the second one had a balance of $371.27. To compare, one of our most expenses months cost us around $2400, whereas No Spend September has cost us a grand total of $882.64!

Give It A Try

I know that an endeavour like a No Spending Month isn’t necessarily possible for everyone, and it certainly isn’t a possibility at all times of the year. However, I don’t want that to discourage you from trying.

Even if all you do is cut back on one thing, that is you making an effort to manage your finances better than you used to.

Even if all you do is change one habit, that is you making an effort to better your life.

Even if all you do is take time to look at your current situation, that is you being mindful and aware that it’s time for change.